Immerse yourself in a dark world of demons 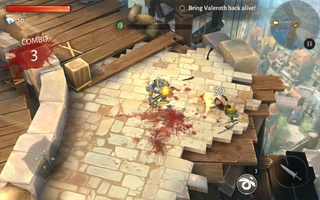 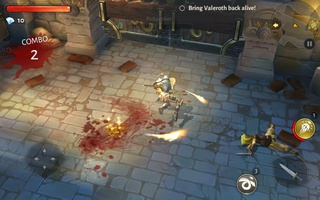 Advertisement
Dungeon Hunter 5, the fifth installment of the star role-playing franchise from Gameloft, returns you to the series's dark world full of demons waiting to be annihilated. This time, though, there's more variety than ever before.

As usual, before you start the game you have to choose what character you want to play. You can choose from five different types, each of which will radically change the way you approach the game's various challenges. The five character classes differ mainly in their initial weapons: two-handed sword, crossbow, two swords, wizard wand, and halberd.

Once you've upgraded your character as you play through story mode – where you can level up and get lots of different pieces of equipment (weapons, armor, amulets, etc.) – you can go to the battle arena. There, you can duel online (PvP) against people from around the world. You can also play cooperatively with other players.

Like all other games in this franchise, Dungeon Hunter 5 has graphics verging on outstanding; all the elements are carefully done down to the smallest detail. Both the settings and the characters make playing a real pleasure.

Dungeon Hunter 5 is a brilliant action RPG, and although the premise of the game is all too familiar, it's still enough fun that the vast majority of users will want to keeping playing just a bit more.
Reviewed by Álvaro Toledo Translated by Taryn

Needs at least 1.2 gigabytes of free space on your device's memory
Advertisement

Why is this app published on Uptodown?
(More information)

Hey, I uploaded a game and fixed it, and after that I am not satisfied, please reply

Kritika: Chaos Unleashed
Bring down chaos and destruction on your enemies
Eternium Mage And Minions
Put on your armor, grab your sword, and get ready to fight
Dungeon Legends
The hottest action RPG on Android
Unison League
Experience intense battles in this action RPG
Portal Quest
Put together a team of heroes and wage battle against your enemies
Epic Conquest
A cute ARPG with an anime aesthetic
Tokyo Ghoul: Dark War
A role-playing and action game inspired by this popular manga
Shadow Of Death
An awesome 2D action game

Genshin Impact
An open-world RPG with spectacular graphics
Brawl Stars
3-on-3 battles from the creators of Clash Royale and Clash of Clans
FNaF World
An RPG protagonized by the Five Nights at Freddy's characters
League of Legends: Wild Rift
The MOBA king deploys its arsenal on Android

Vampire's Fall: Origins
Will you be the hero that the world needs?